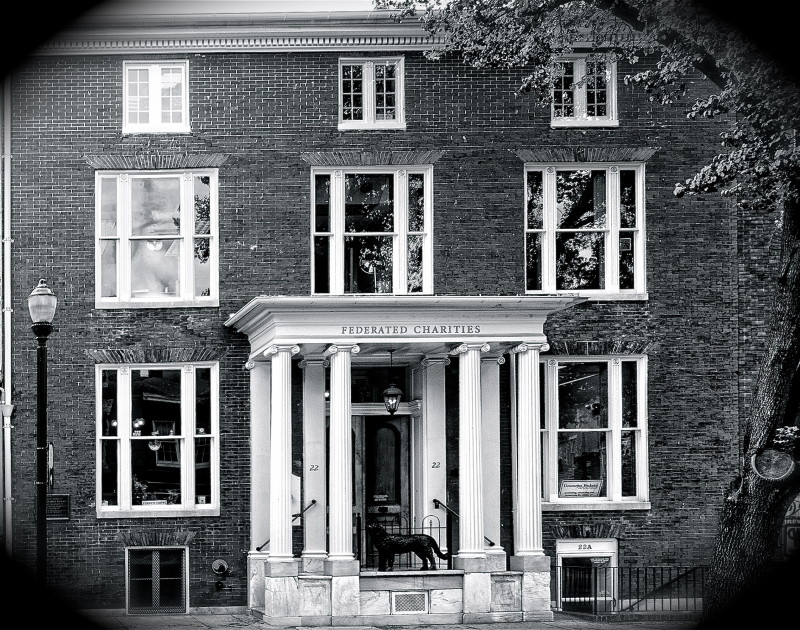 *We maintain a public gallery of many of our archived photos, paintings and artifacts, which detail the history of philanthropy in Frederick for more than 100 years. Our building is open to the public Monday-Friday 9:00-4:30. Individuals may look through our stored archives by appointment*

On February 7, 1911, a group of prominent citizens met to discuss the idea to form a collaboration of all the charitable organizations in Frederick, Maryland as a “federated charities” group. The Federated Charities Corporation of Frederick was incorporated on March 25th of that same year. Our first “home” was located at 133 South Market Street. Our first annual report, published on April 1st, 1912 describes 4 programs offered the previous year with a total annual budget of $3,060:

Anti-Tuberculosis Society (organized in 1907) evolved into a public health nurse program, one of the first in Maryland, which operated until at least the 1950s.

Free Night School – “…gives instruction in rudimentary education to those boys and girls of our community, who, because of financial condition, must work during the ordinary school hours.”

Charity Organization (2nd oldest organization in the city) which provided assistance with fuel oil, food and clothing. Organized by the City Ministerial Association in 1902 in order to, “prevent overlapping of requests for assistance,” this ancillary service became part of the federation in 1911.

The initial work of our organization was described in the following manner, “The poor are cared for in a systematic and efficient way; the sick are visited and properly treated; the children are educated; general distress is relieved; and our citizens are saved from many demands upon their money, by applicants concerning whose needs or worthiness the private individual has not means of obtaining information. Frederick is thus placed in the front rank in charitable and philanthropic work and is so recognized throughout the whole country.”

Perhaps credit for much of the early growth and success of Federated Charities belongs to a woman known for both her “diminutive stature” and her sheer force of will. Florence “Miss” Garner was assigned to Frederick as a visiting nurse in November 1912 where she ultimately remained for 38 years. During those early years in her own words, “Our transportation was by electric cars, the Baltimore and Ohio and Pennsylvania railroads, hired automobile and the old reliable horse and buggy. We carried our school scales and nursing demonstration material over nearly all of Frederick county.” She became the General Secretary of Federated Charities in 1927.

Many of the social service safety nets that exist in Frederick today owe their early development to Federated Charities. In 1933, a special Emergency Relief Association was opened which ultimately was assumed by the Frederick County Welfare Board. Handwritten family case records from that period still exist in our archives today and provide a glimpse of the history of poverty in our community.

The Free Library (a precursor to the C. Burr Artz Library) operated under our roof from 1936-1938 and, until 1972, hundreds of Frederick County children started their education at the Frederick Free Kindergarten before the public school system offered compulsory kindergarten classes. Contributing in the spirit of the building where they attended classes, the children enrolled in the school made periodic contributions of food and money to the needy in Frederick.

Other notable organizations housed in our building over the years have included the Red Cross, United Way (originally known as Community Chest), The Downtown Frederick Partnership, The Frederick County Historical Society and The Frederick Community Foundation.

The 1919 Annual Report of Federated Charities first mentions the bequest of the 22 South Market Street building from the estate of Margaret Janet Williams but the organization did not occupy the building until 1930. Built in 1820, it has been cited as “an extremely rare example of a 19th century urban form: a domestic complex consisting of a high-style residence connected to support structures,” by the Maryland Historic Trust. It is the only known such complex remaining in Frederick from the mid-to late 19th century, and it is also a rarity in Maryland.

In 2002 Federated Charities acquired the Pearre Pharmacy building located at 16 South Market Street. Following several years of planning and one year of renovation and construction, the buildings were connected by an adjoining structure named in the memory of Ramona Remsberg, a former FCNB President and long-time community volunteer.

The statue on our front portico has been the iconic symbol of our property since it was a private home. Added to the site sometime before the Civil War by John H. Williams, it was reported in 1959 to have cost “fifty dollars.” Believed to be a Newfoundland or Chesapeake Bay Ducking Dog, “Charity” was most likely cast at Hayward, Bartlett and Company in Baltimore in the 1850s (during the short 10-year period where this stove company produced iron decorative animals). It is likely that the statue represents a beloved family pet but one entertaining story tells of its installation to prevent late night revelers from falling off the porch after parties.